Whenever the weather gets warm, one thing you can count as a driver: more road construction projects, and with them, more travel delays and opportunities for accidents.

Why accidents? A bunch of reasons:

• Abrupt changes in traffic patterns. Lanes are often reduced, narrowed or re-routed, creating opportunities for inattentive drivers to make mistakes.
• Much lower speeds that can force inattentive drivers to make panic stops, or worse, cause a rear-end accident, the most common kind in work zones.
• Aggressive drivers jockeying for position with dangerous maneuvers.
• The possibility of traffic being forced to stop suddenly because of construction vehicles entering the travel lanes.
• Workmen walking next to traffic.

We can even refer to a personal example. A few summers ago, this writer was driving on a three-lane interstate highway in the left lane, which was being closed ahead for construction. The warning signs failed to register in my brain until the very last moment when, to avoid crashing into a lane-narrowing barrier, I swerved to the right into the path of a car that was about to pass me (illegally, on the right). That car – a large sedan with four passengers – swerved to avoid me and went out of control, finally winding up beyond the right shoulder on grass.

Fortunately, no one was hurt and neither of our vehicles suffered a scratch. But it was a close call, and only because traffic was light was a nasty accident avoided.

The good news on this subject is that because of extra efforts by traffic departments to improve safety around road construction sites, work zone fatalities have decreased by 34% since 1999. Still, the statistics for 2013 – the latest available – are sobering:

• 579 people were killed in construction zone collisions.
• 81% of those killed were drivers and passengers of vehicles, while just 19% were construction crew members, pedestrians or bicyclists.
• Another 29,000 people were injured.

Work zone safety tips
Here’s how to minimize your chances of becoming a construction zone statistic:
• Slow down, but avoid panic braking. Obey the posted speed limit.
• Stay alert and minimize distractions. Dedicate your full attention to the roadway. Avoid changing the radio station, using a mobile phone, eating, or other distractions that can remove your concentration from the road
• Turn your headlights on to increase your visibility to other drivers and pedestrians.
• Be hyper-aware of the environment. Keep your brain engaged on the posted warning signs, watch the brake lights on vehicles ahead, watch the traffic and be prepared to react.
• Don’t tailgate. Follow other vehicles at a safe distance
• Change lanes safely, which means only where pavement markings allow it and when you won’t be cutting someone off.
• Expect the unexpected. Workers, work vehicles, or equipment may enter your lane without warning, and other vehicles may slow, stop, or change lanes unexpectedly
• Be patient. 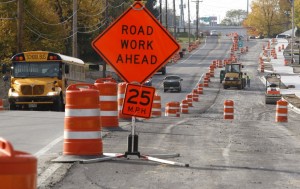 Accept that your trip is going to take longer, and focus on getting to your destination without incident instead of getting there fast.

How to Safely Tow A Trailer Whether you tow trailers as part of your job..

What Is Predatory Towing? Towing is a vital industry, full of helpful service providers that..

Spring is pothole season, and when you hit one it can throw your wheels out..

Subscribe to Updates
This site uses cookies to ensure you get the best experience. Read More Accept
Manage consent

This website uses cookies to improve your experience while you navigate through the website. Out of these, the cookies that are categorized as necessary are stored on your browser as they are essential for the working of basic functionalities of the website. We also use third-party cookies that help us analyze and understand how you use this website. These cookies will be stored in your browser only with your consent. You also have the option to opt-out of these cookies. But opting out of some of these cookies may affect your browsing experience.
Necessary Always Enabled
Necessary cookies are absolutely essential for the website to function properly. These cookies ensure basic functionalities and security features of the website, anonymously.
Functional
Functional cookies help to perform certain functionalities like sharing the content of the website on social media platforms, collect feedbacks, and other third-party features.
Performance
Performance cookies are used to understand and analyze the key performance indexes of the website which helps in delivering a better user experience for the visitors.
Analytics
Analytical cookies are used to understand how visitors interact with the website. These cookies help provide information on metrics the number of visitors, bounce rate, traffic source, etc.
Advertisement
Advertisement cookies are used to provide visitors with relevant ads and marketing campaigns. These cookies track visitors across websites and collect information to provide customized ads.
Others
Other uncategorized cookies are those that are being analyzed and have not been classified into a category as yet.
SAVE & ACCEPT